Started by Henk Spierings
Search
You will need to Sign In to be able to add or comment on the forum!

Can you tel me how dataease is doing this, may be I then can understand these idiot things. It looks like its rounding the figures from right to left. 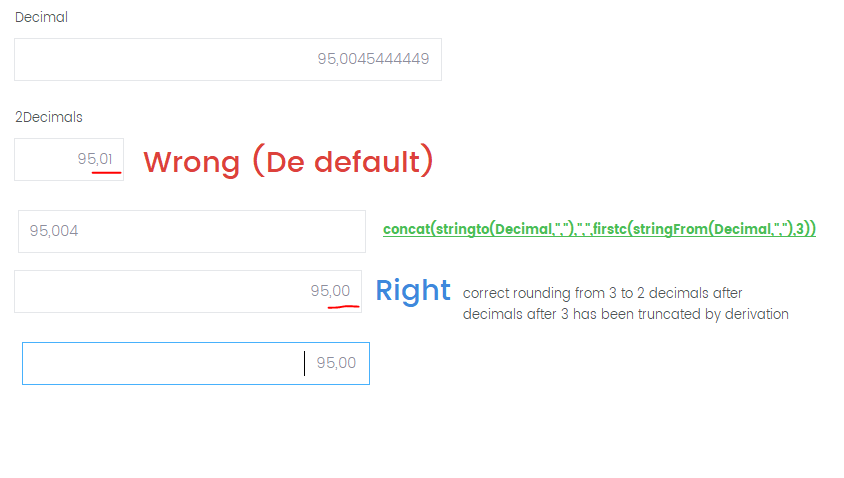 You got it right and from invstigating the code this has been fixed (and broken) a number of times.

The problem is really only there if the 4th decimal is larger than 4, but if it is the entire thing goes haywire. The reason for this is that it was fixed for Money at some stage (2 decimals) and nobody thought about what happens if there is more.

Anyway fix was very "bad" so now we have done proper fix.

But as the fix is only there in a not yet released (as of the day this is written) version of DE9 the fix for now is a workaround.

The workaroud is quite straight forward (I have provided two).


Another ?mistake? in DE is to allow localized decimal separators so if used in England etc. you must check for . rather than , but otherwise it should be the same

What I do is cut out all of the number to , and then I cut out 3 digits of decimal and concat it back up. Then you can round it off.

Another way to do it is:

The reason I would use the former is that if you use the latter you can theoretically run out of digits.

So theoretically if you calculate on billions with 7 decimals you might have a problem.

You choose, the latter if of course the most elegant, while the former look much more impressing to an untrained eye ;-)