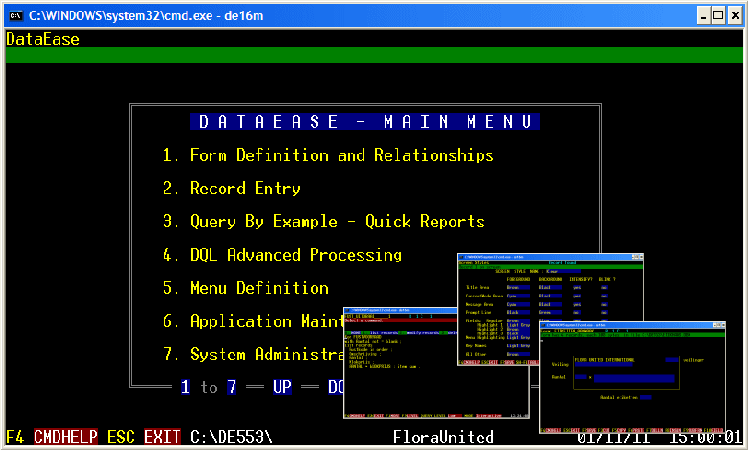 Originally called Datamaster, DataEase' early hallmark was the ease with which non-programmers found they could rapidly develop useful software applications. DataEase' design emphasized the visual design of screen forms and reports while hiding almost all of the arcane details such as properties of the underlying data structure.

In addition, complex data management processes that would typically require a multitude of complex steps to complete with traditional programming tools were handled automatically and transparently as a user made changes to his/her application. For example, when editing an existing form, if the user removed a field, added another, indexed another and changed the data type of yet another, the necessary steps required to reflect those changes in the data structure underlying the form were automatically and non-destructively applied when the form was saved.

Report writing was similarly streamlined. The user simply defined access to the desired data using a simple procedural language known as DataEase Query Language (DQL). A prompting script editor, which permitted any user to instantly create DQL script with no prior knowledge of DQL syntax remains one of DataEase' most overlooked and beneficial features. One was not required to memorize details about the application's components or DQL syntactical construction prior to writing a valid DQL script.

DataEase for DOS gained an eclectic following among application developers and those responsible for managing proprietary business processes in the corporate world. The DataEase Resource Guide, published by DataEase International in the late 1980s lists approximately two hundred commercially-available applications spanning specialized domains from Waste Management to Law Enforcement. Indeed, many corporate users deployed business-critical applications using DataEase including organizations such as NASA, Ford Motor Co., Citimortgage (FKA Lomas Financial Corporation), and the American Automobile Club. DataEase for DOS was distributed worldwide and, according to information provided by Sapphire International, peaked at an installed base of approximately 2 million seats. Despite the fact that Sapphire ceased distribution of DataEase for DOS in 2003, a significant number of DataEase for DOS applications remained in active use worldwide as of 2008. [edit]Awards DataEase for DOS was recognized with a number of prestigious industry awards[4], including: PC Magazine Editor's Choice: 1986, 1988, 1989 PC Magazine Best of Award: 1988, 1990 PC Week Labs Shootout: Winner 1990 The last published version of DataEase for DOS was 5.53 that was published in 2005. DataEase is currently planning to integrate the DFD format in DG3, as well as publishing a new Character based version of DataEase called LegEasy 6 DOS. In fact this is a 64 bit Windows version of the product, but it will be fully compatible with 5.53, and you will be able to run your DFD applications seamlessly in Windows.