DataEase 8 Tips and Tricks - CTRL-F10/Dynamic Lookup/Multibox (Ver. 8.0.0.1463)
Started by DataEase
You will need to Sign In to be able to comment on the Blog!

One of the most used and popular functionalities in DFD was CTRL-F10 or dynamic lookup. It was THE way to lookup data and bring them back to your form.

In DFW this functionality has not been equally popular so why is that?

A big problem for DFW has been expectation. One expected it to be better than DFD in ALL areas and as it turned out, it was worse in many so all the areas where it was actually much better was "forgotten". Where on in DFD accepted that it would always look like DFD whatever you did, one in DFW expected to be able to make the application look your own, so all functionality that reminded you that your app was actually DataEase wasn't very popular. Especially when it was awkward too...

Most of us used buttons and Open Related instead of CTRl-F10, then we could make our own table view form that showed the list the way we wanted to. However, this too had its drawbacks... back in the 90ies it was slow to open a new window and as DFW could only have one type of MDI forms open at a time, you had to decide to run Windowed rather than Full Screen as your model. This wasn't much of a problem in the early days when everyone had the same screen size, but it quickly became a problem when screen sizes multiplied.

To fix the constant CTRL-F10 conundrum they decided to ruin the popular Lookupfield (dropdown) that was introduced in DFW 6.x by converting it into a Lookup/CTR-F10 mongrel that was a poor lookup field and an even poorer CTRl-F10...

In DE8 we intend to fix all of these three issues. We will allow you to use Maximized forms as default (tabbed), and then open forms as modal dialogues on top so you can make your own CTRL-F10, we will add a set of Relational and Un-relational dropdown fields that can be populated and cached. They will be specialised so they will be effective instead of trying to make one object be the jack of all trades like the Multibox. A proper tool chest is always better than a Swiss Army knife, the only thing the Swiss Army knife has going for it is size, and size doesn't matter here...

Those of you that have tried to use Multibox as  a drop down based on a relationship in a Subform on a network,know that this is many steps too far for it simply because each multibox is based on its own multiview that has to drag lots of data over the network for each row in the subform.

So what do you do? In the old days you could have used CTRL-F10 but for some reason you don't want to any more so you get stuck for the reasons mentioned above.

Our proper fixes is a little down the priority list at the moment due to heavy work load, so we thought we should have a look at the trusted old CTRL-F10.

Our first revelation was that it was way to small only showing 6 records... We quickly changed that so now it show 26. 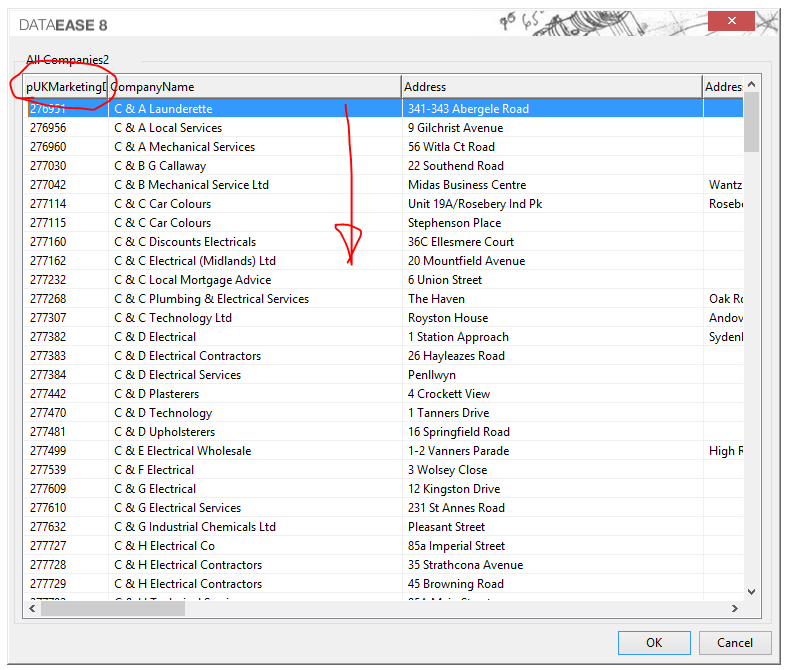 Already much more useful. it still have DE design which can't be helped, but it does at least contain more of YOUR data.

Even when you use a search criteria in the related field like China* the records will come up in record order, rather than sorted and in that lay the answer.

Another "forgotten" feature in DataEase is clustered indexes. Maybe not so much forgotten as never discovered (lots of that in DFW...). 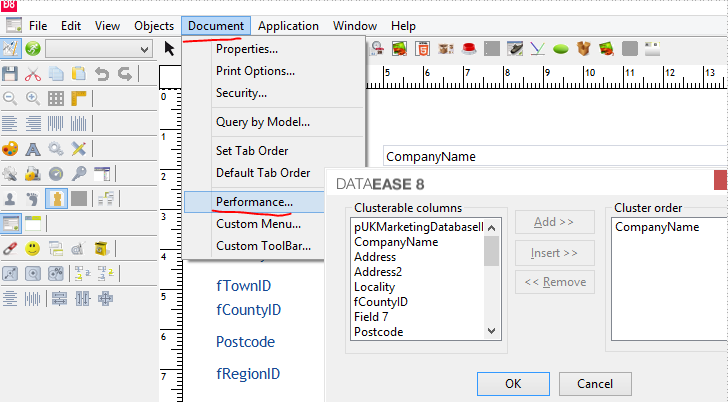 You find it in Document/Performance and simply build the index (cluster). What happens when you cluster is that the data get sorted in the index order and voila... We get the Ctrl F10 to show the records in the right order.

Final problem is that it show the fields in the table in the wrong order. This is a little trickier and only suits if you are using CTRl-F10 to support data (you can do it anyway, but might be to invasive). The columns/fields gets shown in the order they are created in the TDF.

This order is stuck "forever" so the only way you can get around this is by creating the fields in the order you want them displayed.

For an existing table, this means deleting all the fields that is in the way, and add them again after you have saved the table with them deleted.

Now, you might think this is too much hassle and that you will loose data etc. It isn't. Simply export all the data to a csv file, do the changes and re-import the data. To make it simple, simply save a copy of the form first (with new table) and copy the controls over after you have deleted them.

It is a little hassle, but remember that when you have sorted this once, users will benefit from it many times a day for a long time.