DataEase 8.2 - Automated Application Launch from Catalogue (8.2.0.1594)
Started by DataEase
You will need to Sign In to be able to comment on the Blog!

It is very easy for Developers to get stuck in Dogmas and self fulfilling prophecies... A lot of people in DataEase believed that the success of DataEase was down to the interactivity between design and use of an application.

In DFD this was maybe true, but the problem was that they moved DFW much further in this direction even when the all the signs were that the tide was flowing in the opposite direction.

It is nice feature in DFW that you can test your forms immediately when you design them, but it is many steps to far to think that users will basically change and adapt their application in real time. It has been a big problem for DataEase that the design environment is so mixed in with the runtime environment and the other way around.

Over the next versions we will make the distinction between runtime and design time much clearer with a particular focus on both "jobs". Designers will get a more specialist and richer tool kit to develop/deploy and maintain their applications, when users will get a much more straight forward - install and run an application rather than a DataEase Application.

One small step in this direction is the attached tool: Startup.exe with the accompanying Startup.ini.

In DataEase 8.2 we incldued a global variable in your environment as well as included the release version of DataEase 8.x in your global path, so you can launch DataEase applications directly from the catalogue.

All future samples from us will be delployed in this manner, where the only thing you will need to do is to click on Startup.exe in the application catalogue and DataEase will start with the application in that catalogue.

Startup.exe will read the accompanying Statup.ini where you can configure which application to start and which username/password etc. for automatic log in.

The format of Startup.ini is as follows

We will include further features as we progress like, installation of ShortCuts on Desktop/Startup-Menu/Taskbar etc.

If you then edit the startup.ini file and remove username and password, you will be able to start the app directly to security box where you can type in High/High to get to design mode.

This is just a small tool, but it does allow the user to start an application from the catalogue without first starting DE, it will also allow the developer to distribute applications without having to set it up on the workstation to allow the user easy access.

WARNING! This is a release feature and it will only work in FULL versions after 8.2.0.1594) Since it use PATH and global variables to find DataEase this feature is not available in Beta, Exec, Runtime or Timed versions of DataEase 8 as of now!

Problems running Startup.exe. How to debug!

There has been some reported problems on how to run Startup.exe.

How to find out if these environment variables are set correctly:

2. If it doesn't start, the problem is most likely that you don't have enough rights to set the environment variables when you install software. Try running the installation again, but run it as Administrator. Try 1 again after installation.
3. If it still don't work you can check the Settings and see if any changes was made by the installation software. You find the settings in the control panel: Control Panel\All Control Panel Items\System 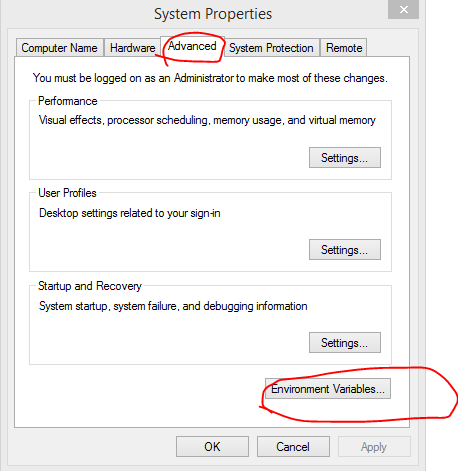 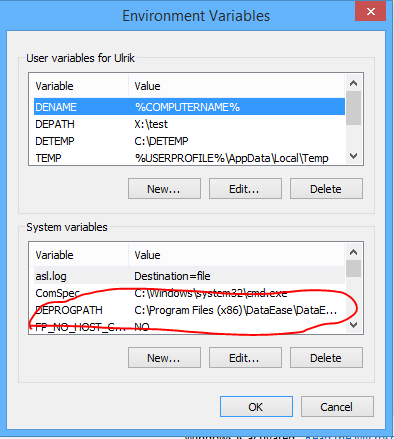 The variables set should be DEPROGRPATH and it should point at the installed DataEase 8.2.

NB! Remember to run it with Administrator Privileges. After running it, perform the tests above again.