HTMLEditor and how to use
Started by DataEase
You will need to Sign In to be able to comment on the Blog!

HTMLEditor and how to use

The HTMLEditor is pre-configured and you can't change the configuration from inside DataEase. We are planning to add a "minimal" version too at a later stage.

However the toolbar is quite "heavy" so we have changed it in the next release to be more compact and "pleasing".

DataEase is a programming tool even though a lot of users view it en par with a tool like Word etc. It is not DataEase which is the end user tool but the combination of DataEase and the application you develop.

It is a fine line to balance on between Simplicity and Functionality. Truth be told, DFW has been to simple and to hard to use. We are definitely doing something with what you can do with it, but on the simplicity side the "jury is still out".

Compared to most Development tools, DataEase has always been simple to use but is that really the standard we should measure us against?

Anyhow for now, we concentrate in enabling the product and in showcasing how you can use it.

WebClass() is a cross purpose class that is there as an addition to traditional DataEase but it is not directly "compatible" with it.

HTMLEdit is a pure GUI Visible class and forms no part of Printing or Reporting (Like TabControl). It is an input control to feed data/info into an application.

WebField and AdvancedWeb field is the same. It is for interactive use and not for printing or reporting. I.e. they are pure presentation controls.

WebFields based on Memo present HTML stored in a Memo field. HTMLEdit  does the same but at the same time you can edit it.

PrintMemo() prints what is stored in a Memo as HTML.

Printing in DFW has always been poor, and one of the main reasons for that is that they have used the FORM language which is absolute for printing too. This might have worked in DFD where a field could not contain any more information than the number of characters that it was defined to hold.

A form and a Report/Letter/Invoice etc has very little in common as they have evolved in completely different directions.

In a form you want interactivity when in a Print you want an expanding layout etc.

It should come as no surpirse that DataEase is moving away from using the FRM format for printing and the WebClass() is the first part of that.

By simple memo manipulation and tagging you change the HTML template and print it.

If you want to get a better idea on how to do this have a look at the include CRM sample which is based around this approach. 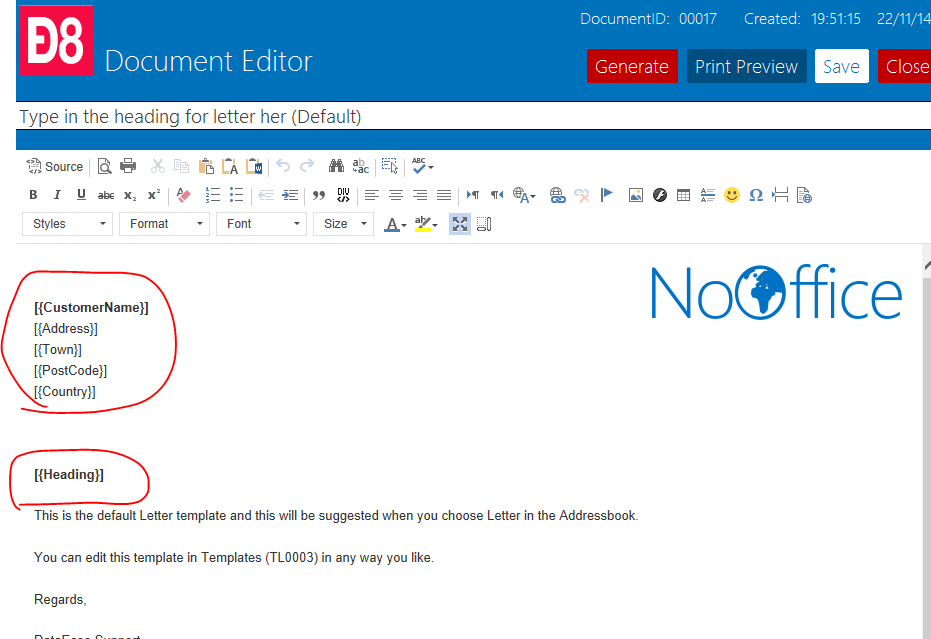 Here we have copied a "template" from another table. This template contain tags which we will replace with the Name etc via MemoReplace().

As this is a mail merging approach we will generate one letter pr. addresse and place it in the documents table. We can then later print all of them, or email them etc.

This is just a simple implementation of this technique to showcase the approach.

DataEase 8 is a "new" product and that means that one will need to invest a little time into learning the new mindset, but I am willing to guarantee you that when you do it is very worthwhile.

You can do things now that was impossible only as far back as 7.2.

The QBM/DQL reporting you still find in DE8 is not the future of print and reporting in DataEase but we will still look into at least being able to print WebFields as they appear on screen but it will still not be the way to create letters, invoices etc.