New functionality in DataEase 8.5 - MoveToFront/SendToBack* (Ver. 8.5.0.2128)
Started by DataEase
You will need to Sign In to be able to comment on the Blog! 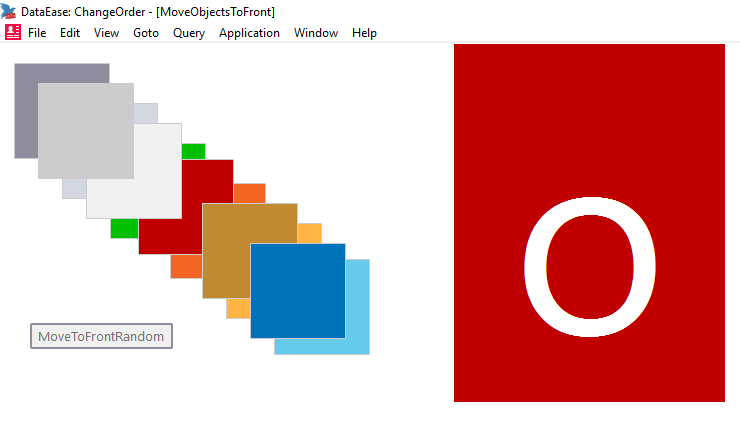 DataEase for Windows object order and priority has been somewhat of a mystery since the release of DataEase Express 1.0 in 1992.


Users have been struggling with putting the object on in the right order to get objects on top of each other and below each other.

It is quite straightforward, but as with many explanations that just proves that what you have been trying to achieve has in reality not been "voodoo" but impossible...

The Object order is quite straight forward - it starts in 0.0 (Upper left corner) and goes left to right, top to bottom 1 pixel at a time. One line down is higher in the order than everything that is one line higher.

as we see above - as long as the silver rectangle is higher up than the red rectangle it will be behind but as soon as it is 1px lower down it will always be in front.

When the rectangles is on the same line, the silver one will be behind until the left side is 1px further to the right of the red one when it will move in front.

As every object is a rectangle this rule is universal and unbreakable!

With the new additions to SetState() you can finally control this entirely yourself.

It is as easy as showing/hiding objects.

*SendToBack is not yet implemented in 2128.

PS! You will need the latest beta: