DataEase 8.5 New Features - Window Manipulation including Modal Forms. (Ver. 8.5.0.2172)
Started by DataEase
You will need to Sign In to be able to comment on the Blog! 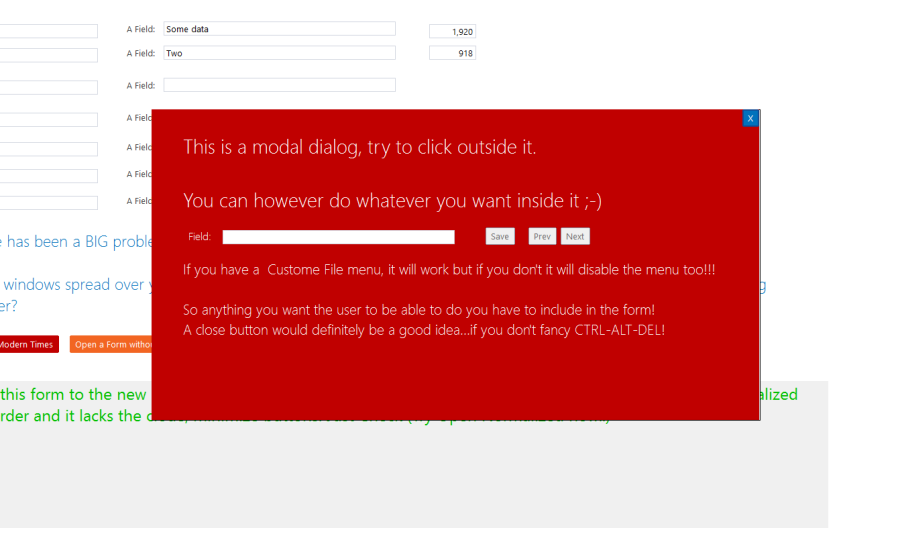 It is not an exaggeration that Window handling in DFW has been hopeless!

OK! We said it but you have all been thinking it.

In DataEase 8 we have "forced" you to use Maximized windows and shown you a lot of techniques so you can emulate traditional DataEase techniques like opening a related form on top of a form etc.

However, it is just masking a problem that is to obvious.

1. Because of the outdated MDI model all windows inside DFW need to be of the same type, either Normalized or Maximized.
2. When normalized there has been no real control where the windows end up, the border and caption is massive etc.
3. When maximized you can't open a form on top of another form.
4. When you open a form that is set to Normalized all other forms, including catalog and Editors etc are also Normalized.

We can keep on going, but it is just abyssal....

So why haven't anyone done anything about it before?

Because they believed in their own mantra. It won't work...this is how MS designed it...we will need to replace the MDI model...

We have revisited this problem ourselves many times and haven't really seen a way (other than forcing you to use Maximized) until now.

And the solution is as easy as it is functional - forget what it is and focus on what it looks like.

Obviously what we want is to load forms on top of each other,and ideally also load the modal...it has been a dream forever.

And now we can!

We simply scrap Maximized and use NorMaxMax() which is basically a combination of loading normalized forms the size of the program window and then remove borders and captions.

It looks like Maximized, but it is really normalized so you can load forms on top of "maximized".

And you can even remove Close, Minimize, Maximize, Normalize from caption.

Have a look at the video below, download the sample and the latest 8.5 and try yourself: