HowTo:: How to configure your DE85 for another codepage,language,charset

We have done a lot of different fixes and improvements since we took over DataEase Development back in 2007. We had to find our way and not all of them has not been given the "promotion" they might deserve.

DataEase had a wide array of nationalised versions up to and including DFW 5.x but it was more or less completely abandoned from 6.x onward.

Truth be told this partly due to the massive problems experienced with "stabilising" just one version of DataEase and the fact that the popularity of DataEase for WIndows was never the same as for DFD.

We experienced very much of the same when we tried to take DFW forwards, so after having looked into it and made a German and an Arabic version of 7.2 we more or less focused on bringing the "lacking" functionality into the product rather than making a multitude of different versions.

However as part of the work we did a fix so you could use any language in DataEase which had been a complete impossibility in DataEase for WIndows prior to 7.2

Since we continued to focus on the English Speaking market (LATIN1) we never really promoted this solution, but when people (Russian, Greek, Arabic, Persian, Indian so far) partners has approached us we have showed them how to utilise it.

We did this "Fix" back in 2009 but it has not been much used as it involves re-configuring your WIndows etc.


However, the ones that do use it are very happy with it.

Basically the configuration is two steps:

1. You need to configure your system Locale to be Chinese. 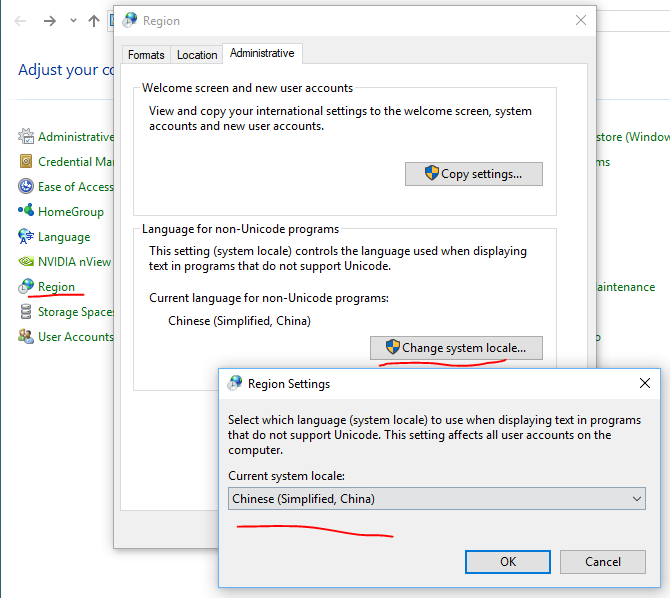 This WILL effect all your 8 bit character translations so for instance if you live in Norway or Germany it will have detrimental effect on your ability to use "local" characters, but if you live in an English speaking country this is not a problem (One of the reasons why we don't feel this is a 100% solution ;-)

You will now have to restart your computer.

2. The next setting is for a translation of characters internally in DataEase and this is Application Specific so the switches need to be set in each application where you want to use.

The settings are found in the INI file that is located in the Application catalogue.

It will be typical the same as the repository i.e. RDRRxAAA.INI where x is the application letter.

In the Settings under Interface you will find these to.

Set them to the values below.

The method for doing this for any other language is the same you just need to set the correct system locale and use the correct CodePage and CharacterSet.

This list is incomplete; you can help by expanding it.

On the forum about How to configure your DE85 for another codepage,language,charset

Hi there,I am trying to use an external MySQL DB in dataease. I have successfully create the ODBC link and added the DB to dataease. I can also access the DB from dataease. Now, just for testing purposes, I am trying to create a simple report b...

Thanks. Anyway I'm trying to use this fuction but it seems to me that it doesn't work on 8.2. I tried also in a DQL.There's something wrong?<img src="data:image/png;base64,iVBORw0KGgoAAAANSUhEUgAAA9IAAAJ3CAYAAAB4NWk3AAAAAXNSR0IArs4...

Thanks for the very good explanation!AS...

I am pleased to see that the migration from Dos 4.53 is then sa 5.5 works. A really useful thing would be a compiler of SQL languages. Will you get there?Original Text:Mi compiaccio a vedere che la migrazione da Dos 4.53 è poi sa 5.5 funzio...

On the blog about How to configure your DE85 for another codepage,language,charset