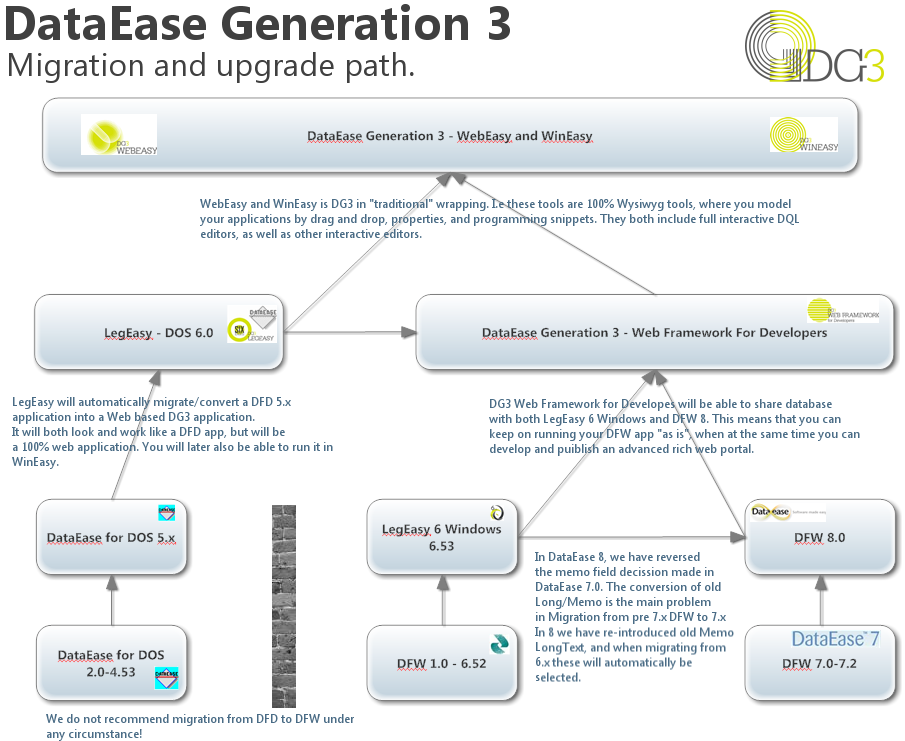 DataEase is currently undergoing a big transition. Since 1995 with the release of DataEase for Windows (5) every version has more or less been an increment of this product. In Version 5 every new version was simply a bug fix. In 6 the news was OML, Webpublisher and Lookupfields. In 7 the news was tabs, Multibox, Memofields and another version of WebPublisher.

What they all had in common, was that they were buggy, and that for the next couple of years every new version was a bug fix on the last. None of the new versions addressed the real issues with DFW, and the frustration in the user base kept growing.

The same way that it was close to "impossible" to migrate from DFD to DFW, the line migrations inside DFW also caused major challenges. Changes to character sets, changes in functionality rather than addition of new and re-structuring caused problems, that made it very costly both in time and money, to move from a previous version of DFW to the next.

With WebPublisher, DataEase showed that we knew that the future was on the web. Rarely have any new DataEase product been awaited with more expectation, and caused more disappointment. It was notoriously difficult to install, and when it was successfully working, it was so slow and offered so limited functionality that it could hardly be viewed as more than a study in futility. The fact that it on top of all this, also was inhibitingly expensive, insured that very few copies was sold and even fewer ever successfully deployed.

But in spite of the above, only one thing was certain, and that was the upgrade path. The instance a new version was released, the only way forward was to move to it or for ever be left behind in the world of no bug fixing, no support and no help.

The current development team at DataEase is all previous users of DataEase, but mostly we are users from the DFD era. "Our" DataEase was one of flexibility, predictability, functionality and robustness. Upgrade from one DFD version to the next, was simply to take a backup, answer yes to migrate, and everything would work as before with just some more functions to play with.

We were all "lost" to DataEase through the DFW era. We tried to get our head around DFW, but we must have been to "dim", because we couldn't. It was just to much of what it was, and to little of what we wanted it to be.

All of the above and a lot of things we have had to learn over the last 5 years since we started the development of DG3, has influenced how we now view versions, migration and upgrade paths.

In our work with DFW 7.2 , 7.5, 8 and DG3 we have had to figure out what DataEase really means. It was so successfully captured in DFD, and equally vacate in DFW. Compared to the competition, DFW is both very functional, flexible and easy to use, but it didn't meassure up to being DataEasy. In moving forward with the third increment of this much loved product, we were very aware that we needed to get it right. We could do the mistake of going retro and make another DFD, but times have move don and DFD is not a product for the 21st century. Our job was to grasp the essence of DataEase (DFD), and make a contemporary implementation of these core values and ideas. One thing we realised very quickly, was that DataEase is all about evoloution rather than revolution, and that DataEase is a DIY tool for people with ideas, rather than a development tool for "professional" developers. With this in mind, we decided that the area of Migration was over. Never again should a DataEase user have to undergo a big project to move a DataEase app to a new version. If they wanted to upgrade, they should simply have to take a backup, hit the upgrade button, and the app should work "as is" from day one. A big mistake that was done between versions in DFW, was that functionality was changed or re-engineered, rather than left alone and new functions added. This too, will never again happen. In all future version of DataEase, we will keep all existing functions "as is" and any new functionality will be added rather than re-implemented. This way one can always run an old app in a new version, and then change or progress it at ones own leisure. Another thing we have realised is that when DFD was a technology leader, with being amongst the first to exploit and branch into new technology, DFW has been a bit "nerdy" where being different and going ones own way has been more as a matter of fact, rather than being the way forward. In DG3 we try to go back to the roots in the understanding that we have tried to analyse how we can improve the development process as well as the user process.

As we have stipulated above, the migration from one DFW version to the next has been riddled with challenges, so a lot of our users have decided to stay put where they are, and await the "future". 6.52 has been the most popular version of DFW, and with the problems that migrating to 7.x has caused, especially when it comes to performance in forms/tables that use Memo fields, a lot of this demographic has stayed put. The first challenge for this user group, was Windows 7 which basically stopped it in its track. For a while users would be able to hold off, but eventually the problem became insurmountable. Our response for a long time was "Upgrade to DataEase 7", but when the amount of challenges this caused for big and advanced 6.x apps, we decided that a better approach would be to help them out with creating a new 6.x version, that would run under Windows 7. But keeping people in 6.x would not help them moving forward, so part of the strategy was to reach down from DG3 to the 6.x users, rather than force them to reach up to us, so we implemented the same connectivity between DG3 and 6.x as we have already made between DG3 and 7.x/8.x Target group: DFW 1.0 to 6.52 LegEasy 6.53 - Share DataBase with DG3, so you can immediately start to develop a Web Portal on your 6.x app when at the same time running it as is, on Windows 7 or XP. When DataEase 8 is released, you can also make a fresh attempt of converting it to DataEase 8, as we have addressed most of the issues that caused a Migration from 6.x to 7.x infeasible.

We have over the last year, tried to implement a similar strategy as for DFW 6.x i.e. to allow users to run their DFD apps in DFD 5.x, when at the same time sharing the database with DG3. But earlier this year we had to conclude that DFD is simply to outdated, and to try to run it under Windows 7/8 in x64 mode is "impossible" in any realistic and operational manner. Since we started the DG3 project, we have felt that the big problem that caused so many users to stop using DataEase when DFW arrived, was because we never offered a "run as is" for DFD apps in Windows. One of the first things we communicated to the old DataEase team was this, but the response we got was that it was "impossible". Our response to that, was that it is not impossible, it is not even very hard. We know it is too late for most of our DFD users, but since it is a "goal post" in our development, we have decided to implement it. Where 6.53 is simply a re-development of 6.52, DOS 6 is a completely new version of DataEase. Where 6.53 still use a 6.x database, DOS 6 will be 100% DG3. There is more in common between DFD and Web than there is between DFD and WIndows, and hence it is rather straigthforward to implement DFD as a DG3 application. LegEasy (DOS 6) - 100% web based app, that you will be able to run without any installation on client computers. Later one will be able to run it as a Windows app through WinEasy. Will look and work like a DFD app, but one will instantly be able to move it forward with DG3. One can also maintain and develop the app as a DFD app, as all DFD functions is supported. Target group: DFD 1.0 to 5.53* * DFD 1.0 to 5.53 users will first need to migrate app to DFD 5.x, before migrating it to DOS 6. There will be no interoperability between DOS 6 and former DFD versions, but you will be able to share the DataBase with DFW 8.

DFW 8 is both a bridging version between DFW and DG3, and a new DFW in its own right. You will need it if you want to share your DFW 7.x app with DG3, the same way you will need LegEasy 6 Windows to share your DFW 6.x app with DG3. In the same way LegEasy 6 Windows is created to safe keep the investment our user base have made in developing DFW 6.x apps, DFW 8 is crated to safe keep the investments in DFW 7.x apps. It was never a option for us to migrate DFW 7.x apps to DG3, so instead we have opted to move the DFW product range forward on its own merits. DFW 8 is not merely a "glossed" up version of 7.x. In 8.x we address a lot of the issues, that has annoyed so many DFW users, as well as implementing new technologies in the product. We have finally implemented RT fields, WebFields, Text and HTML bodies on DQL (you can now format your print any way you like....), a full manipulation class for Memo fields, printer handling like DFD and a lot more that you will be able to read about other places on this website. Target group: DataEase for windows 7.0-7.2 users. Secondary Target group: DataEase for Windows 5.x to 6.x that want to expand their DFW functionality.