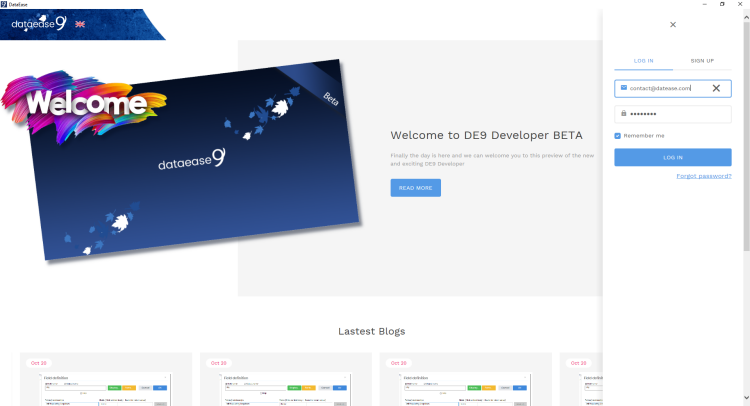 The time has come and today we let the cat out of the bag - for the first time we let anyone outside our closet partner network see and play with DE9.

We call it Beta 33% but don't make that put you off. It is a fully working replacement for DE8.5 which was the first milestone we wanted to reach before we let it out.

However it is much more than that which you will quickly find out. The reason we call in 33% is because it is at this stage only 33% of our ambition for DE9.

So within these 33% you find all the functionality from DE up to and including 8.5 final with over a 100% new functionality partly revealed today and to be revealed and evenly spaced out increments over the next 3 months.

We have decided to release an "unfinished" version good enough for you to start developing and learning the new ways when at the same time you will feel familiar enough as this is still a Dataease you recognise.

You might say that delivering a fully working replacement for 8.5 is a strange goal but in DE9 we have picked Dataease completely apart, scrapped the old, outdated and restrictive GUI to replace it with a modern and fully configurable/programable interface so finally we can again utter:

The version you download and install today is the beginning of the future so take your time to play with it and explore. It was never designed to be an upgrade from DE8.5 or previous versions so even though it is shipped with a migration tool and will migrate from 8.5 and previous versions - just DON'T!

Dataease used to be about quick and fun development, not about migration and legacy applications and that is the goal of DE9.

To make it easier and quicker to build from scratch rather than try to move forward some old and cumbersome applications because it seems like the best way forward.

Over the next months we will keep on adding to DE9 till we have the 66% version which will be the release version of DE9 Developer for Windows and the final 33% will be when we add all the ready developed functionality for you to go up and beyond WIndows onto the web and the cloud.

We will do all of these steps in an truly evolutionary way so every step will feel completely natural.

Today is not a day to list all the new features, functions, technologies etc. It would just swamp and overwhelm.

Today is the day to just have a look, play with the very limitted samples and get a feel of this brand new Dataease.